As a follow-up to my August 4 post on the federal appeals court decision throwing out the death sentence for Dzhokhar Tsarnaev for his role in the Boston Marathon bombings, I append to this post a section of the verdict form on mitigating circumstances used at Tsarnaev’s death penalty hearing.  This form was provided to me by Professor Mary Rose of the University of Texas, and is available at the Federal Death Penalty Resource Counsel’s website, https://fdprc.capdefnet.org/verdict-forms.

At the hearing, Dzhokhar argued that his life should be spared, since his will had been overborn by his dominating older brother, Tamerlan.  The answers below to Questions 4 through 7 show that three jurors were sympathetic to this view.  But, as the appeals court rightly noted, the trial judge made a mistaken evidentiary ruling that prevented the jury from hearing relevant information that might have made the mitigation argument stronger.  The excluded evidence related to allegations that Tamerlan was involved in an earlier, unsolved triple homicide.  Had the jury heard and believed this evidence, three or more have held out for a life rather than death sentence.

When one combines this error with the  errors on questioning jurors for bias I noted in my previous post on Aug. 4, one sees why it was necessary to set aside the death sentence.

Jeffrey Abramson, author of We, the Jury: The Jury System and the Ideal of Democracy, is a professor of law and government at the University of Texas at Austin. You can reach him by e-mail at jabramson@law.utexas.edu. 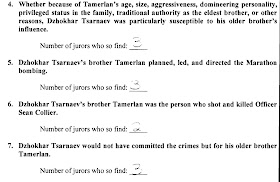